Why The Left Cancels Any Climate Questioning | Science Matters (rclutz.com) 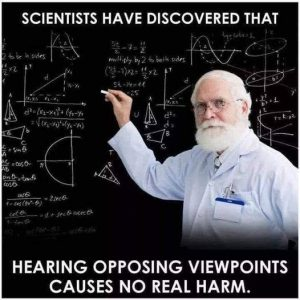 Why The Left Cancels Any Climate Questioning
Daniel Turner writes at The Spectator Big Tech is censoring the climate change debate. Excerpts in italics with my bolds. Wittgenstein wrote that as an ontological and epistemological foundation f…

Form the source the author writes:

“He who controls the language also controls reality, something that today’s left understands brilliantly, even devilishly. The language around climate change and the green movement is one more area the left wants to control, especially given that trillions of dollars in spending are on the line. Big tech is now doing its part to protect the Green New Deal and radical green ideology from dissenting views. Google and YouTube’s recent announcement that they now prohibit “climate deniers” to monetize their platforms”

What exactly is a Climate Denier? Are you in denial when asking question about feasibility, reality, costs, value for money and returns, affordability, etc.?

The Google and Youtube ban comes into effect in November 2021. The ban will cover ads for – and the monetization of – content that contradicts the “scientific consensus around the existence and causes of climate change”.

To question is not denial. Denial means:

The interesting words are: a) “content that contradicts the “scientific consensus”, b) “causes of”.

What happens if there are more evidence out there that reflect on the drivers of global warming not limited to Green House Gas (GHG) emissions only? There are reputable peer-reviewed research undertaken that focuses on all causes. What exactly is scientific consensus? A group of PhD’s that meet and drink tea and shake their heads in agreement with each other? Is scientific evidence not based on fact, hypothesis and proven theories. The boundaries with which science operate today is far different from the time of Einstein.  Steve E. Koonin’s “Unsettled” aims to explain the concept around consensus. This book received a lot of criticism. However, one need to maintain an open mind. Another great book “Inconvenient facts, The science that Al Gore doesn’t want you to know”, by Gregory Wrightstone

So by questioning the causes of climate change leading to people being banned, marginalized and de-platformed (seems to be the modern-day in-thing to do as we live in a snowflake and cancel culture) infringes directly on freedoms of expression.

No matter how we look at it ALL SCIENCE matter not only selective science (I am not talking about pseudo science. I am talking about science that can be backed up by fact). In addition to that, without energy live on earth cannot be sustained given the strong data correlations between energy consumption, growth, poverty eradication, improvement in life expectancy all driven by population growth. Are the Climate Activists next going to petition the culling of people given these correlations?

The only way to bring all the pieces together is:

Eugene is an accomplished Analyst, Accountant, Controller, CFO, and Corporate Finance expert with many years of diverse finance and accounting experience across different industries. He is a knowledge- and information worker with a passion to solve complex financial management problems and processes. Eugene is passionate about finance and economics and enjoys blogging about interesting economic aspects of current times